So this weekend for date night me and Mr J decided to try out something a bit alternative to your typical show – The Roof (a recommendation from my best friend who when questioned on the show was giving nothing away!)
The Roof is Frauke Requardt and Davis Rosenberg’s third production, following the success of their other shows such as Electric Hotel and Motor Show.  Being that I have not seen either of those two shows I really had no clue what I was letting myself into. 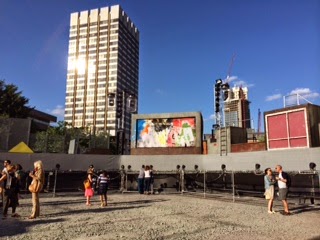 The Show is set in a Car Park just off the Southbank behind The National Theatre.  The Car Park also has a  cash only bar called Saltbox for those pre-show drinks.  On entering the set (or arena you could call it) we were given a pair of headphones that we had to wear throughout the show. The cleverly built set created by Jon Bausor, the set designer for the London 2012 Paralympic Opening Ceremony, wraps around the audience offering a 360 degrees view of the ‘game’
There are no limits.  There are plateaus, but you must not stay there, you must go beyond them.  If it kills you, it kills you.  A man must constantly exceed his level.  If you’re not better than you were the day before, then what are you doing – What’s the point?
From ‘The Art of Expressing the Human Body’. By Bruce Lee, John Little
The Show itself was a clever execution of a game brought to life.  To put this into perspective the game from my point of view, is a cross between the Hunger games and Super Mario Bros.  The use of the mix of three dimensional sound and free running make you feel as if you are the player playing the game.  The game is one of survival, almost where the rules have been lost and the player is desperate to stay alive.
This was my first experience of a Frauke Requardt and Davis Rosenberg production and it did not disappoint.  I’m not going to lie it was a bit weird to begin with.  But not all shows can or should be singing and dancing and full of sparkles. The whole concept of the show really does make you think about how the player in this game transpires to everyday life and as a human being our aspiration for constant self development.
In conclusion The Roof is a must see!  This is the show’s last week so don’t miss out and book your tickets Here.
What did you think of The Roof?
Have you seen any other shows by Frauke Requardt and Davis Rosenberg?
Mrs J xxx

Mental Health Awareness Week UK – How are you feeling, really?

This week marks the start of Mental awareness week in…

Why travelling long haul with a new-born was a great idea.

When we shared that we had already booked a long…

And just like a blink of an eye two months…

Hi I’m Aarti a 30 something magpie of all things bling, and a lover of beauty products. I’m a born and raised London girl, and a work in progress country convert.

No images found!
Try some other hashtag or username